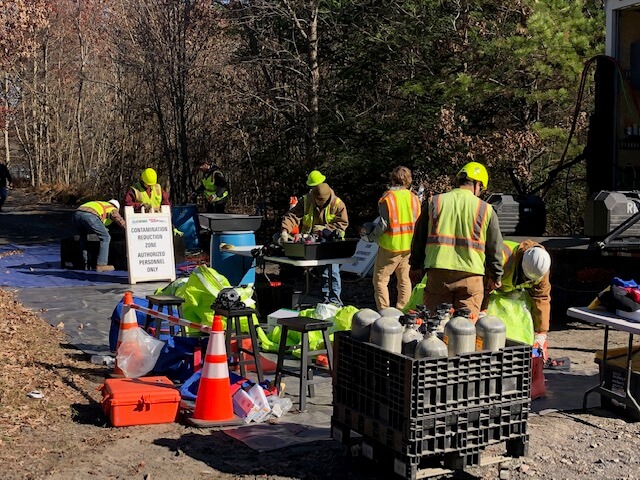 Rapid Response, Inc (RRI) provides 24/7/365 response capabilities and is the go-to responder for a variety of companies and governmental organizations.

We sat down with Ryan Shelly, RRI’s Response Manager, to learn more about the exercise and the PEMA recertification process.

In the exercise, a local water authority representative heard a hissing sound coming from a building containing two chlorine cylinders during a routine inspection. The worker, who was positioned upwind and could not smell anything, stopped before entering the building and called 911 to report the possible release of chlorine. “Hopefully this is the way that the worker would respond to this type of situation in the real world,” said Shelly. “After 911 was called, RRI was dispatched to the scene for potential chlorine gas leak.”

Once on the scene, the Hazmat Branch Director met with the Incident Commander (played by a member of CCEMA) and the water authority worker to learn more about the situation. “There is an interview process associated with every hazmat response,” said Shelly. “We need to obtain as much information about the incident as we can. We spoke to the worker to determine the layout of the room, including where and how the cylinders were stored, what other chemicals were present in the room, and any other pertinent information. We then created a map that was presented to the Entry Team to ensure an efficient response to the leak.”

As information on the scene is gathered, roles are assigned to team members. These positions fall into the chain of command structure outlined by the National Incident Management System (NIMS). They include the Hazmat Branch Director, Hazmat Safety Officer, Entry Unit Leader, Decontamination Unit Leader, Medical/Rehab Unit Leader and a Technical Specialist.  Each member of the team played an important role in RRI’s response.

The Technical Specialist worked with the Safety Officer to determine the proper response and decontamination methodology. “Together, the team researched multiple sources and reference material on the chemical to figure out the best possible response,” recalled Shelly. “Their findings, along with site conditions including weather and other factors, enable them to make informed decisions on PPE selection, evacuation and isolation considerations, and decontamination methods. They needed to research a minimum of three sources backing their decisions.”

Once the Entry Team was fully briefed of the situation and the Decontamination Unit was ready, the team suited up in fully-encapsulating level A hazmat suits and entered the building. A small label that was hidden on one of the chlorine tanks indicated where the leak was located. This forced the team to search for the leak just as they would in a real incident. Based on the location of the leak, the Team determined the best device from the Chlorine ‘A’ Kit. Once the Team successfully stopped the leak and ventilated the room, the crew performed air monitoring and determined all was clear.  The Team then proceeded to the Contamination Reduction Zone (CRZ) to be decontaminated by staff outfitted in Level B PPE.

At the end of the exercise, the State Evaluation Team met with RRI Senior Leadership to discuss their assessment. “We were told that we performed at a very high level and that PEMA would be recertifying us for another four years,” said Shelly. “It was great to hear all of the positive feedback from all four State Agencies. It really gives the team a sense of pride. We have a great group of guys and everyone involved deserves praise.”

EWMI and RRI are proud of the teamwork, organization, and preparedness that went into making the recertification a success!